European red stag were introduced to Patagonia in the 1940’s.  With few competing species, ideal climate, perfect habitat and few predators they have flourished.  Patagonia’s red stag are amongst the largest typical red stag in the world.  Few genetic modifications or mutations have taken place or been allowed over the years. In fact, it’s illegal to release or introduce genetics into the wild herd, so Patagonia’s red stag have remained true to their species and exactly like their European ancestors.

The majority of the country’s herd is concentrated around Bariloche, Junin and San Martin de los Andes, with the most trophies traditionally found in and around Nahuel Huapi and Lanin National Parks.  Farther south in the Esquel Area the herd is sparse; however, some of the largest trophies in the country can be found in the region, mostly bordering Los Alerces National Park.

Over the years, there has been a diversion of the species and there are now two different types of red stag roaming Patagonia – mountain stag and plains stag.  Mountain stag are the larger of the two, both in body and in antlers. The mountain stag’s size directly correlates to their environment and less competition. Mountain stag spend more than ten months of the year holed up deep in Lenga forests foraging on abundant vegetation and bushes.  High in protein and minerals, their food source fortifies adding body and antler mass. Stepp animals on the other hand tend to be smaller although much more abundant. It is not uncommon for estancias located on the plains to have cull hundreds of stags on yearly basis to prevent overpopulation.  Plains stag tend to graze on plentiful grasses, shrubs and willows and enjoy a rather easy living. The climate is mild and they reproduce rapidly. Although stags are much more abundant in the plains, they tend to have smaller bodies and antlers due to overpopulation (competition) and a less nutritious food source. 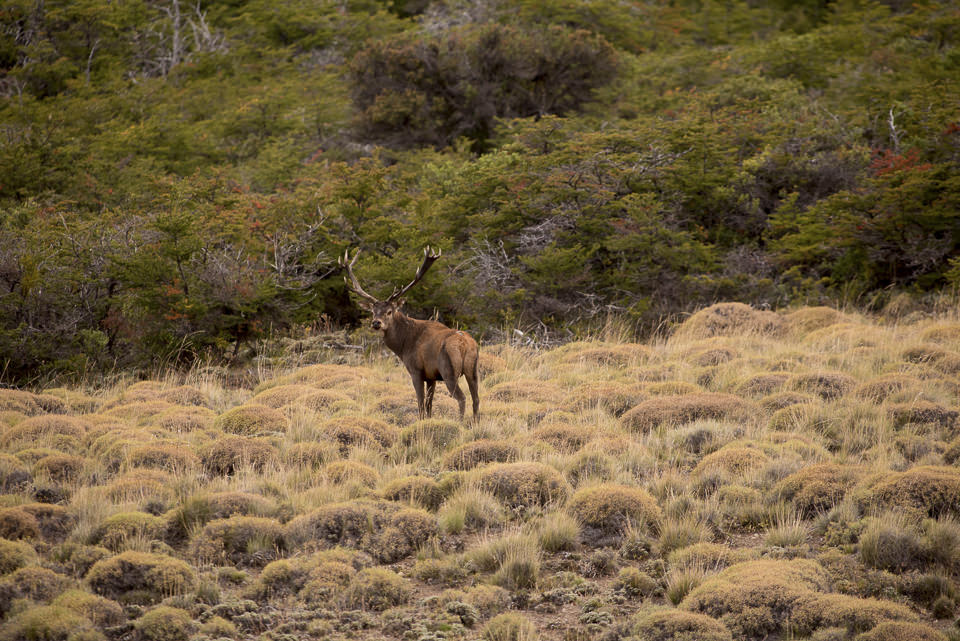 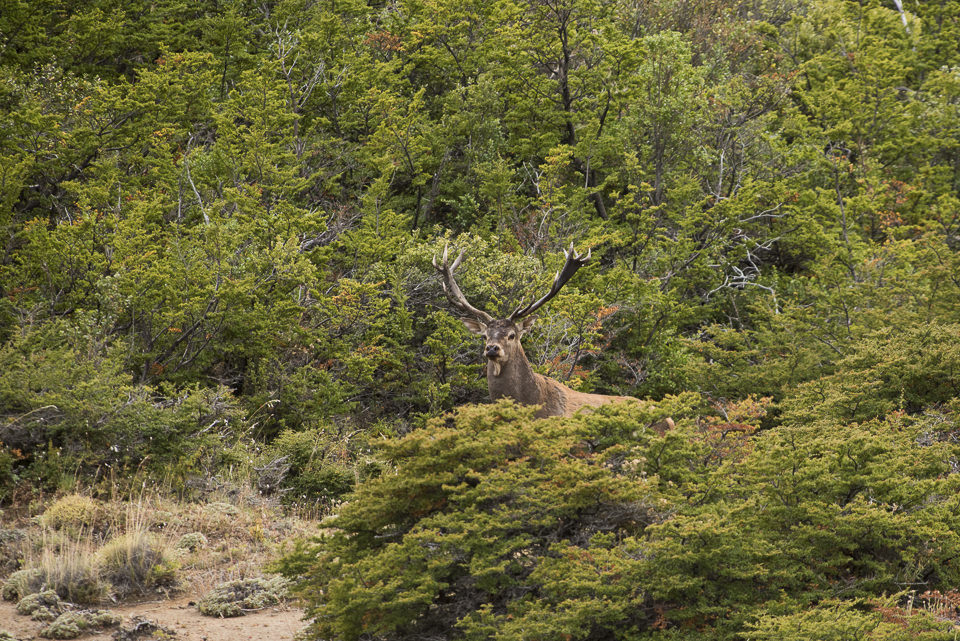 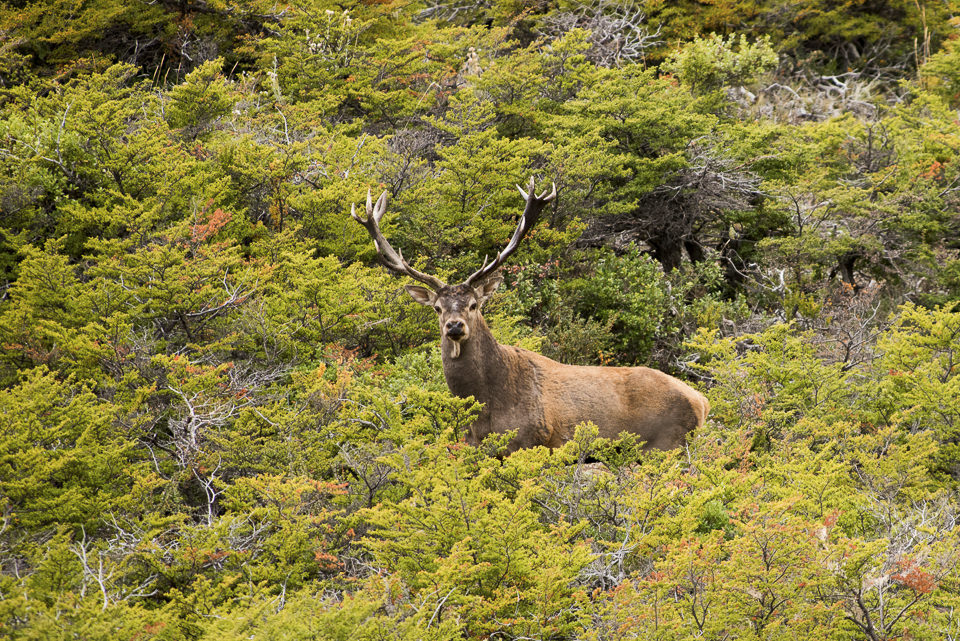 A red stag spotted on the hillside as the light slowly diminishes.

Most Patagonia mature trophies are typical, high and wide.  Mature stags, normally over seven years old, will have defined mass.  Most will have between 12 and 18 points. Some, but not all, will have a defined crown on one or both sides.  Number of points does not always define the trophy; although, some hunters prefer points over mass. Patagonia red stag are robust and massive and often weigh more than 500 pounds.  Most stags have dark brown antlers with ivory tips and are perfect examples of the red stag species.

Stags in Argentina are typically measured using the European scoring system of CIC combining main beam length with several measures of mass.  Points are somewhat arbitrary to the CIC scoring system although they do add to the total. Stags between 190 and 200 are average. Stags over 200 points are exceptional.  Stags over 220 are world class. Two of the largest stags taken by our hunters in the last five years only had 13 points. Neither had a defined crown but both scored over 330 CIC.  Stags can also be measured using the SCI measurement giving much more weight to total inches and points with less consideration being given to mass. A stag in comparison to an elk, is a smaller animal, and without mutated genetics, it would be rare for typical and wild red stag to achieve more than 340 SCI points.

A normal hunt will take dedication and a full week to locate and hunt a mature trophy.  Some estate hunts are also available, allowing guests the opportunity to hunt a trophy in fewer days and the option to fly fish or hunt quail on the same trip.  A typical hunt would start in the morning about an hour before first light and start in the afternoon a couple hours before dark. It is typical to hear dozens of stags roaring in the valleys and river bottoms where they tend to congregate.  Stag are not like elk or other deer species and tend to like to stay alongside or within the brush. They don’t respond to a call like elk and careful stalking is required to get close. The can be difficult to spot even though they roar almost continually so patience and persistence are both required.  Guides and hunters must move quickly as the roaring session normally doesn’t last more than an hour after first light and darkness comes quickly during the evening hunt. Hunters must also move carefully as stag (especially the hinds) have an incredible sense of hearing and can hear clumsy hunters from hundreds of yards away.  It is always desirable to make a clean kill shot, but essential for red stag because they are large, robust and hard to bring down. Shots of 150 yards or less are desirable for both the excitement of approaching the animal as well as placing the best shot. 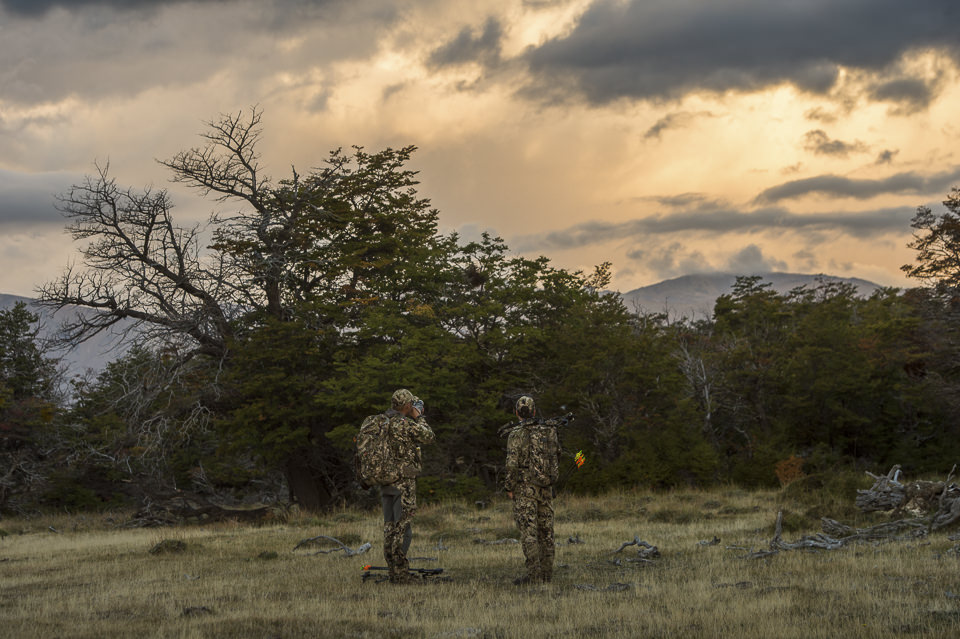 Archery hunting is also possible but consider wild red stag to be the one of the hardest animals to hunt with a bow and arrow.  Large trophies are rarely called into a hunter and time must be dedicated to find areas where animals will pass through on their way back to high country or to find ideal sites within the roaring areas with plenty of cover to stalk animals when roaring in the valley.  Archery hunters should be in great shape, mobile and ready for the ultimate archery challenge. Archery hunters should also practice and be proficient up to 50+ yards.

The “roar” typically takes place between March 7th and April 15th.  Local weather and conditions dictate when stag start and stop roaring each season.  Although stag can be hunted before and after the roar, they are incredibly difficult to find, let alone hunt, as they tend to be solitary and hole up in difficult country to access.

The best hunts are booked more than a year in advance and some are booked indefinitely by groups of American and European hunters.  PRG South offers guided red stag hunts from PRG’s Lodge at Trevelin, Estancia La Vieja and Estancia Escondia. PRG can also book hunts at area estancias at PRG North; although, those hunts are typically handled and guided by the estancias.  Contact us today for more information and to book your red stag hunt now! If we don’t have space at our own lodge or out camp, we can likely find you a hunt at an area estancia normally not available for first-time hunters to Patagonia.